The Domestication of The Chicken

Most people might not put a lot of thought into the roast chicken they had for dinner, or the scrambled eggs for breakfast, but the chicken, much like dogs and cats, has a long and fascinating history that’s intrinsically tied to the development of the human race. Chickens today number in the billions, and are used for their eggs, meat, and feathers.

From their humble beginnings in Asia to one of the most widely consumed animals in the world, this is the history of the chicken.

The ancestor of the modern chicken is known as Gallus gallus, and it was a jungle fowl that lived within Southeast Asia and China, and the people of the time quickly realised that they could capture and breed the fowl in order to produce eggs, which were a truly valuable source of nutrients at the time. It’s believed that we first discovered this bird around 10000 years ago, right at the dawn of civilisation, and our ancestors would have recognised that certain birds laid more eggs than others.

Farmers would have bred the healthier roosters with the hens that produced more eggs, and thus the first cases of selective breeding for chickens began. While it started with a single species, today, there are more than 500 different breeds of chicken, all valued for one trait or another. 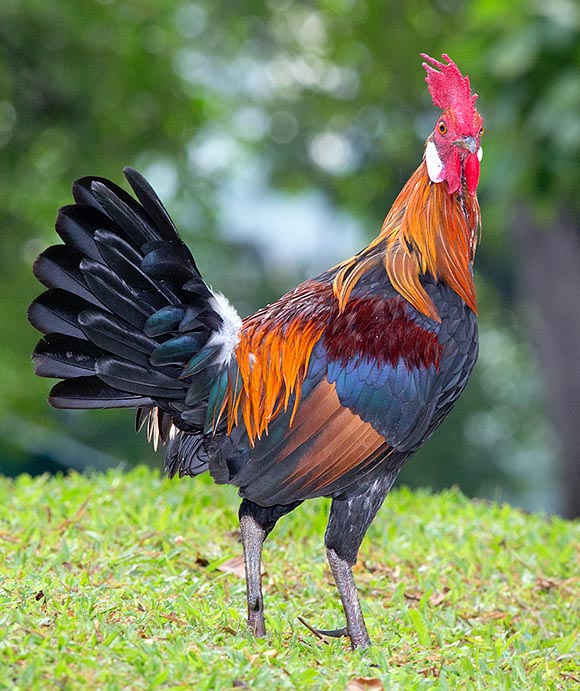 It wasn’t just the people of Asia that prized the chickens, and it also didn’t take long for them to be traded to other civilisations, such as the Ancient Egyptians. In fact, the Egyptians were some of the very first nations to use chickens for cockfighting, but they were also able to create artificial incubation for the birds, allowing to keep the eggs safe from predators. The Ancient Romans viewed chickens as sacred, and those that were raised by the priests of the time would be held at guard posts around the Empire. The Romans tied a lot of superstition to these sacred chickens and believed the chickens’ actions could lead to either good or bad luck.

Today, there are hundreds of breeds of chickens, and the average hen is able to produce more than 300 eggs in a single year. Thousands of years of selective breeding have allowed us to create an animal capable of creating many times the eggs than its ancestors could manage. It’s believed that there are between 20 to 30 billion chickens in the world, far outnumbering the human population, and are almost as popular as Australian online betting sites.

Their numbers have swelled alongside the modern agricultural revolution and automation, allowing us to process millions of chickens in a single day across the world. Genetic alterations have also allowed us to make our chickens larger than ever before, and while this can be seen as a good thing for food production, it also means that many chickens suffer. Regardless, the chicken has a long and interesting history that has existed alongside our own for millennia.